Good things come to those who wait.  Sometimes it can be twice as nice. Starting this month, the first weekend of the month I will feature a double edition of The Weekly Roundup.  The post will go up on Saturday instead of my usual Friday and will feature two items in each category that I feature.  This month I will be sharing two items from each of the following categories:

So lets get right into it.

If you were to ask most beauty bloggers what are the two beauty items that they always carry in their cosmetic bag, nine times out of ten they’d probably tell you mascara and eyeliner. This is true because most beauty junkies are already obsessed with skincare, especially with the beauty trend leaning towards the no-makeup look. Currently, I’m obsessed with the Marc Jacobs Beauty Highliner Gel Eye Crayon and Make Up For Ever’s Smoky Extravagant Mascara. The Marc Jacobs Beauty Highliner Gel Eye Crayon is the perfect liner. The formula is highly pigmented and glides on smoothly. You can use it on your waterline or smudge it for a smoky eye effect. Make Up For Ever’s Smoky Extravagant Mascara is pretty much the only mascara you’ll ever need. Not only is does it offer you with an exclusive formula to create 4-D lashes, but the brush is tapered in a way that you are able to get into the corners of your eye to catch even the tiniest of lashes for a fanned out doe-eye effect. 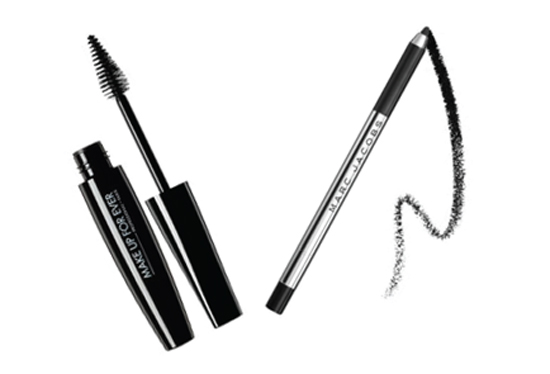 Last week my favorite online jewelry retailer, Baublebar launched their latest Guest Bartender collaboration with American Horror Story’s Emma Roberts. The collection is everything that I witched for.  Incorporating some of the hottest jewelry trends including ear jackets, ear cuffs and colorful crystals. From the collection, here are my favorites.

From top to bottom, left to right: 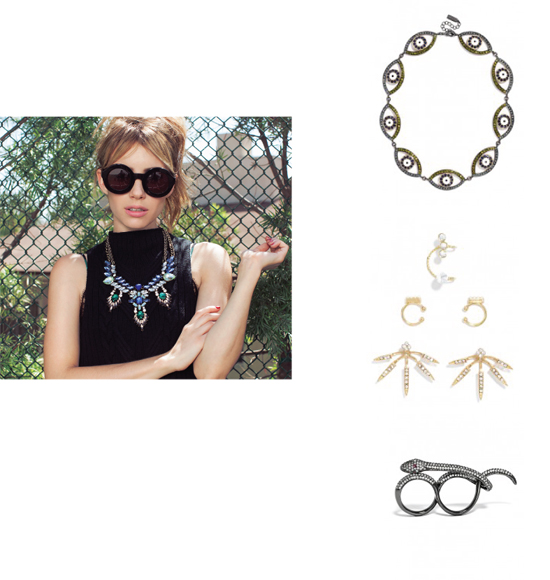 Pairing any of the jewels with my second part of the fashion section also satisfies another of the season’s biggest trends – Sport Luxe. The sport luxe trend is not entirely new. In fact, J.Crew has been doing this for quite some time,it’s just now, everyone is catching up. Well, what did you expect? Jenna Lyons always seems to be at least two seasons ahead of the game these days. With the workplace becoming more and more open to creative style incorporating sport footwear into your professional attire has become more and more acceptable. A great way to introduce this trend into your wardrobe is to start with vintage sneakers. Here’s the thing about vintage sneakers. Vintage sneakers are a fantastic addition to your wardrobe because they have a sense of history associated with them. They can be worn with a pencil skirt, dress sweats (yes there is such a thing, but be careful ladies – don’t just think that your sweats from Victoria’s Secret will do because they wont) from J.Crew or Gap paired with an oxford shirt that is preferably jeweled, and your hair loosely curled or up in a top knot is perfect. Here are a few vintage choices that you can add to your wardrobe,. Of course, most of these are on sale – not at all a shocker coming from me.

From top to bottom left to right: 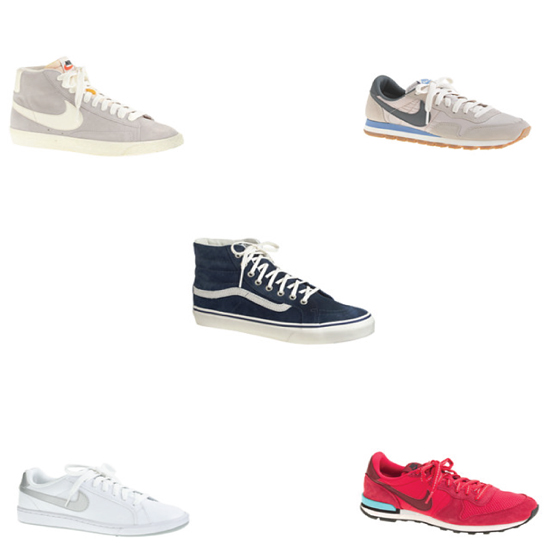 Ah, my favorite part of the weekly roundup. The sounds. A couple of weeks ago and friend and I had the pleasure of seeing a great blues band – The Tedeschi Trucks Band at The Beacon Theater in NYC. It was my first blues concert – and I thoroughly enjoyed myself. The Tedeschi Trucks band is a band led by husband and wife duo Susan Tedeschi and Derek Trucks. Both of them had their own bands and then decided to join both bands to in my opinion one of the greatest blues band EVER! Susan Tedeschi’s voice is amazing. Their debut album Revelator released in 2011 earned the band a Grammy Award for Best Blues Band in 2011. While the album was great, there’s nothing like hearing them live. My favorite song on the album is Midnight In Harlem (obviously). Here’s a link to the song that has me jonesing for home. Of course I included a link to a live performance – I wouldn’t have it any other way.

Next is an album that I had been anticipating for a while. Lenny Kravitz’s newest album will no doubt become a classic. This album is a throwback to Lenny’s earlier albums like 5 and his Greatest Hits album. A eclectic mix of funk, soul, and rock, Lenny has once again taken his place as one of the greatest funk-rock musicians ever. My favorite two tracks on the album are:

The Pleasure and the Pain

I’ve recently become obsessed with Food & Wine magazine. I like to think of myself of somewhat of a foodie and I’m pretty versatile in the kitchen (my mom is a caterer) so cooking for myself and for my friends is kind of my calling. Over the past two weeks I haven’t done much cooking (thanks to my long work hours) but I did manage to get a few dishes in.  Of the six dishes that I made, my two favorites were Rib Eye and Radishes in Bagna Cauda Butter (click here for recipe) and Smoky Quinoa with Bacon Salad (click here for recipe). For the Smoky Quinoa with Bacon Salad I used red quinoa instead of white quinoa and added heirloom tomatoes, because what’s a salad without tomatoes. Mangia!

On October 1st I finally finished reading Chimamanda Ngozi Adichie‘s Half of a Yellow Sun. Coincidentally, it was also Nigerian Independence Day. The story centers around the Nigerian Civil War that spanned between the early 1960s in to the 1970s. As a first generation Nigerian-American this story was very similar to the stories that my father had told me of his struggle during that period as an Igbo in war-torn Nigeria. In the backdrop there is the story of twin sisters Olanna and Kainene. Born into the upper class of the Igbo these two young women show their strength through love, forgiveness, acceptance and political turmoil. It is a story about people and the struggles they face in their lives and how they choose to deal with them. Stories like that are the foundation of any great literary work – and Half of a Yellow Sun is a great literary work. After reading the book, I decided to rent the movie. It was everything that I had hoped for. I was especially pleased that most of the Nigerian characters were at the very least played by Africans including Thandie Newton (Olanna) and Chiwetel Ejiofor (Odenigbo). Anika Noni Rose played Thandie Newton’s twin sister Kainene.

Earlier this year, a movie that did not receive critical acclaim opened in theaters. The name of the movie – Belle. It is the story of a mixed-race aristocrat in 18th century England, Elizabeth Dido Belle Lindsay. She was born to an aristocrat English father and an African slave. Her father who wanted her to live a better life then brought her to his uncle to raise her. Affectionately she was called Dido by her English family who loved her dearly but struggled with the fact that she would not be accepted in society because of the color of her skin, despite the fact that she was wealthy. I had done some research on the history of this movie late this Spring but never got around to actually watching it. I’m glad I did. The title role was played by Gugulethu Sophia Mbatha. The film was brilliant. As Dido becomes a young woman she is forced to deal with the harsh realities of racism and questions the hearts of those closest to her including her great uncle Lord Mansfield, the Lord Chief Justice and his wife. When a slavery issue comes to the court of Lord Mansfield, her family is then forced to deal with what is custom and what is right. It is Dido that champions this issue from behind the scenes ultimately swaying a decision that impacted English law and served as a basis for abolitionist fighting that ugly truth that is slavery. 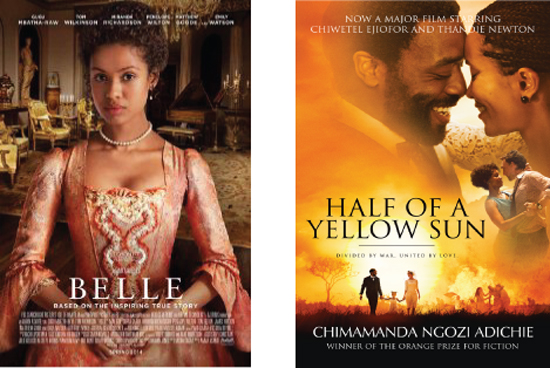 I hope this post has satisfied your appetite. Until next weeks edition of The Weekly Roundup, always remember to SEE. TOUCH. TASTE.